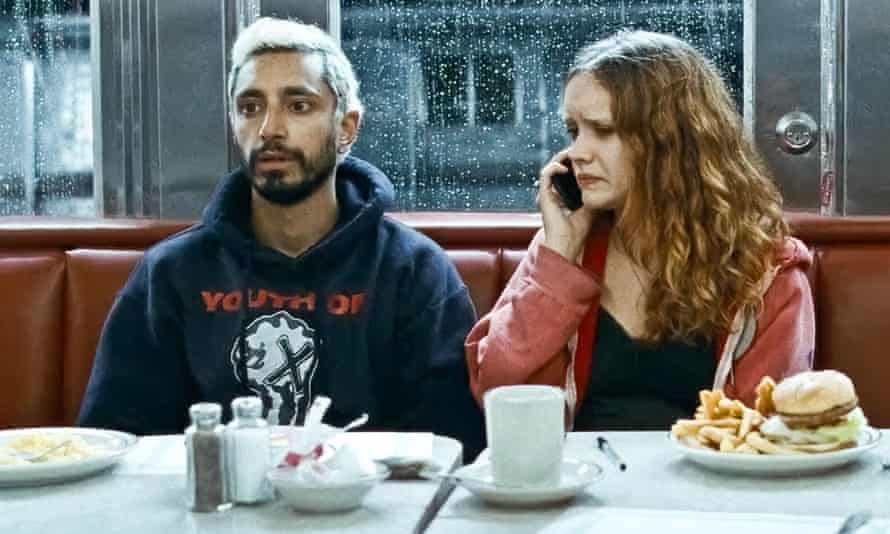 Sound of Metal (2019) sounded like a film I wouldn’t want to see. My sister Danielle watched it first and relayed the plot: a heavy metal drummer and recovering addict suddenly goes deaf and has to learn to deal with his changing reality.

Mmyeah, that plot screams “depression” and “anxiety” to me so, I’ll just wait over here…

However, I am writing this post — so obviously I watched it. And I’m actually glad I did.

Riz Ahmed plays Ruben, the main character. His girlfriend and bandmate, Lou, is played by Olivia Cooke (she was Artemis in Ready Player One).

I didn’t realize at first, but I’ve seen Riz Ahmed before. Most recently as a supporting character in Rogue One: A Star Wars Story. Now that I’ve witnessed THIS brilliant performance, I’ll definitely be looking out for him in the future. He made Sound of Metal feel more like a documentary than a fictional drama. Sooooo visceral. So real!

Anyway, one night while Ruben and Lou are on stage, Ruben completely loses his hearing. They both freak out, but Ruben believes there’s a surgery that can fix it. The problem is, it’s expensive, and they’re living out of a motorhome and not making much money.

Lou encourages Ruben to stay at a support home for the deaf while they figure out what’s next. The hope is that Ruben can stay strong enough to resist his addiction and also learn some basic skills like sign language.

Ruben, understandably, is a mixed bag of emotions. He’s angry. He’s frazzled. He’s anxious. He doesn’t really want to be there or take part in the activities that are meant to help him. Yet, over time and with the help of a committed mentor, he starts to find a feeling of community.

However, that’s not the end of his struggle. Despite his moments of joy, Ruben is still without Lou and without his drumming passion. He’s tired of sitting around waiting for a resolution.

So, what now? Ruben decides to create his own destiny. The question is whether the person he believes he is, is the same person he is meant to be…

What’s particularly captivating about this film (aside from the impressive acting) is the sound editing. They used sound to give life to Ruben’s struggle. Hearing the world “through his ears” created an immersive glimpse of what his character was experiencing. It also provided insight into a lesser-understood perspective: what it’s like to be deaf. Is being deaf a disability, or is it part of an identity? It depends on who you ask.