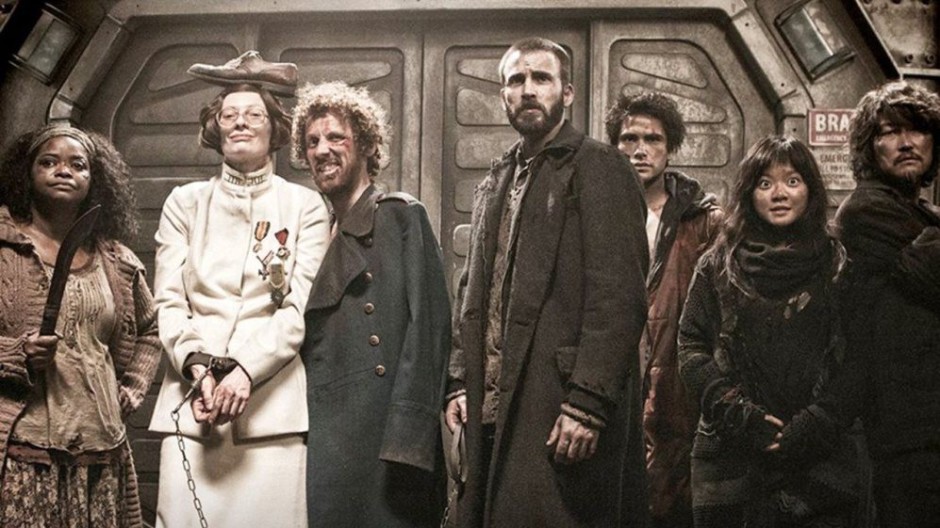 An imaginative and unique science-fiction thriller. That’s how I would define Snowpiercer. Is it highly improbable that an experiment meant to slow global warming could backfire and kill off the majority of the planet? Well, yeah, but it still works.

This movie has a lot of post-apocalyptic subplots happening. In the year 2031, the only remaining people on Earth live on a train called Snowpiercer, which apparently will just zip around the frozen world forever (global warming experiment = new ice age) using a perpetual-motion engine.

But it’s not all “kumbaya” on the choo-choo.

People exist as the haves and the have-nots. The poor are treated like slaves and fed a weird gelatin substance while the Richie Riches’ occupy a completely separate part of the train and have fancy dinner parties. Military police keep the peasants at bay by beating old women and yelling aggressively.

Curtis (aka Chris Evans, aka Captain America) is one of these lower class passengers, and he has had ENOUGH. He devises a scheme to get to the classy part of the train and take it over. Curtis believes he and his motley crew must aim for the train’s engine. He who controls the engine controls the world.

Everyone keeps asking Curtis if it’s time to execute his big plan, but he’s still figuring out the details. In the meantime, the psychopathic upper class steals tiny children from their moms (Octavia Spencer for one), freezes a man’s arm off, and generally treats the oppressed people like subhumans. Tilda Swinton plays the creepy, sadistic leader with John Hurt as her regular-guy adversary.

Finally, after all the waiting, Curtis’ plan is set in motion. The back-of-the-train people use metal barrels affixed together as a giant battering ram. They ram through each train car and fight the military police they meet. Once they enter the prison, they release the cracked-out genius who designed the train’s locks and security systems to help them make headway.

Each train car reveals a new nightmare and each step unravels their master plan a little bit more. The closer they get to the front of the train, the crazier and more brutal things become. I’m not one for brutality, but there is a pretty epic hand-to-hand combat scene at one point.

Nothing is constant and the story takes several horrifying turns as we discover new truths about the characters’ backstories. The end may surprise you.