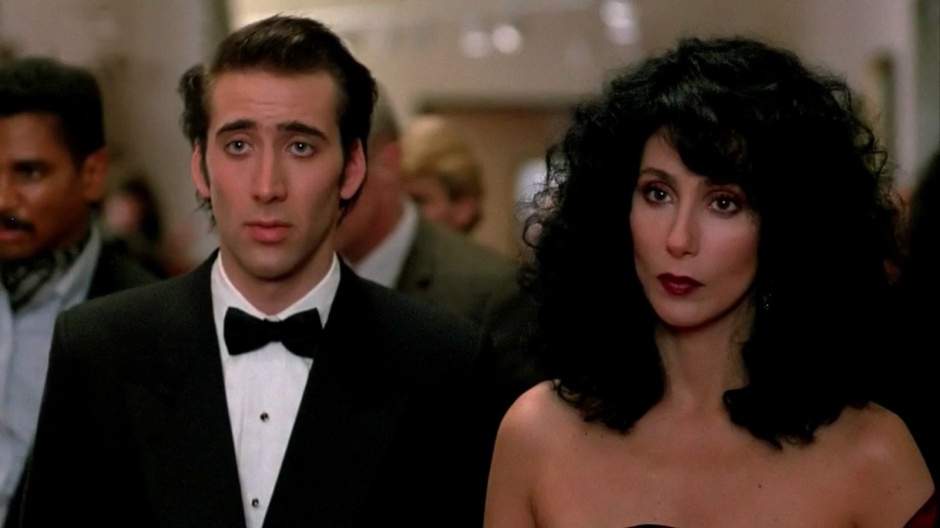 As the title suggests, Moonstruck’s premise has a lot to do with the power of the moon. The turning point of each character’s story happens under stunning moonlight on the same evening. It is a familiar moon; a moon that was seen once before:

I never seen anybody so in love like Cosmo back then! He’d stand outside the house all day and look in the windows. I never told you this cause it’s not really a story. But one time I woke up in the middle of the night cause this bright light was in my face. Like a flashlight. I couldn’t think a what it was. I looked out the window, and it was the moon! Big as a house! I never seen the moon so big before or since. I was almost scared, like it was gonna crush the house. And I looked down, and standing there in the street was Cosmo, looking up at the windows. This is the funny part. I got mad at you, Cosmo! I thought you brought this big moon over to my house cause you were so in love and woke me up with it. I was half asleep I guess.

Before I sum up the storyline, consider some of the major elements of this film:

The story is of Loretta Castorini (Cher), a 30-something widow who’s given up on love because she thinks she’s past her prime. So, she settles for Johnny Cammareri (Danny Aiello), a 40-something Italian Mama’s Boy with an itchy scalp and a pinky ring. He’s a nice guy, but he’s basically just a blob of nervous man-flesh without any true substance. Loretta doesn’t love him, and she’s honest about it, but her desire for companionship makes her feel safe in settling. Unfortunately, after Johnny’s awkward marriage proposal to Loretta, he must leave immediately for Italy to take care of his dying mother. He promises they will be married when he returns, and he asks Loretta a favor in the meantime: Call his estranged brother, Ronny Cammareri (Nic Cage) and invite him to the wedding.

In order to understand the magic of what’s about to unfold between Loretta and Ronny, you must first understand a bit about their characters’ personalities. Loretta is a snappy, firecracker of a woman, always ready with a sarcastic quip and roll of her eyes. Ronny is the original Emo with a healthy dose of Stanley Kowalski (Stella!) torment. He is dead inside, and only his passion for the opera remains. Both characters have a romantic past riddled with bad luck and freak accidents, and they blame all of life’s subsequent disappointments on these tragic incidents.

Back to the story: Loretta calls Ronny, who promptly screams through the receiver like a man-beast and hangs up. Loretta, being the fiery Italian she is, isn’t satisfied with this encounter, so she decides to pay Ronny a visit at the bakery he owns.

After a signature Nic Cage tantrum that involves violent threats, aggressive bread chucking, and plenty of crazy eyes, Loretta calmly continues to engage the apparent psychopath. She asks Ronny if they can go somewhere and talk it out. Ronny, now exhausted from his absurd rant, invites her upstairs to his apartment.

As they sit in Ronny’s kitchen, Loretta and Ronny experience an immediate and unexpected intimacy. Each of them laments about the woes of their past loves, but instead of consoling one another, Ronny and Loretta respond to each other with a brutal honesty that one would only expect from a very close friend. The conversation is raw and visceral, and both characters are a little taken aback. In that moment, all the fear, the passion, the hate, and the vulnerability that was dormant inside of them is laid out as plainly as the rare steak on the table between them. Finally being real with themselves, Ronny and Loretta are unleashed and hungry for one another. The tension is tantalizing as Ronny whisks Loretta from the kitchen to make love to her.

While Loretta and Ronny experiment with the volatile mixture of pent up passion and loneliness, the rest of Loretta’s family deals with their own life struggles. Every character in this movie — from the lead roles played by big names like Cher, Nic Cage, Vincent Gardenia, Olympia Dukakis, and John Mahoney, to smaller characters like Bobo the waiter and the gypsy woman at the airport — is an unmistakable gem. No small roles or small actors in sight! Whoever cast this film should get a Lifetime Achievement Award. Here’s a quick insight into some of these perfectly faulted characters:

Cosmo Castorini (Vincent Gardenia) – Cosmo is Loretta’s father. Wealthy from his lucrative plumbing business, Cosmo is seemingly living the dream. However, his character remains stubborn and unsatisfied. Cosmo’s wife, Rose, suspects her husband is having an affair.

Rose Castorini (Olympia Dukakis) – Rose, like her daughter, is a hot-blooded Italian steamroller. She’s dry, she says what she thinks, and she’s the family matriarch. Rose is struggling to understand her husband’s recent distance from her by analyzing every male she comes in contact with.

Rita and Raymond Cappomaggi – The signature Italian Aunt and Uncle, and signature adorable elderly couple, Rita and Raymond are light-hearted and can always be found at the Castorini dinner table. Their supporting characters give us insight into Cosmo and show us there’s always hope for true love and laughter with your soulmate.

Perry (John Mahoney) – John Mahoney’s character can’t seem to make it through a scene in this movie without getting some sort of beverage thrown in his face. He’s a handsome professor trying to relive his youth by chasing women, particularly his students, and continuously failing miserably to relate. He meets Rose at Bobo’s restaurant and becomes an important piece of her internal struggle.

Old Man – “Old Man” is the actual name they gave the character (hilarious!), although he is supposed to be Loretta’s grandfather. He lives with Loretta and her parents in their gigantic New York house, along with his dogs. This character is mostly defined by his facial expressions and gestures, as he tends to embody the quiet, ancient grandpa blending into the drapes. But in typical grandpa style, the few comments he does choose to make are some of the simplest and wisest of the film.

As Ronny and Loretta realize the mistake of their passions, Loretta is determined to make things right. She must never see Ronny again. Ronny is willing to make the sacrifice as long as Loretta spends just one more evening with him at the opera. Although Johnny’s unexpected return looms over Loretta, she agrees to the night out. All the characters’ storylines converge and take shape at this turning point, so I’ll leave the rest of the story a mystery for you to uncover when you watch it.

My cup runneth over with memorable scenes and dialogue from this movie. The two best monologues are performed by the brilliance that is Nic Cage – first with his rant in the bakery, and second with his desperately romantic (and kind of depressing) plea to Loretta, part of which includes this intriguing observation:

Moonstruck is raw, charming, and relatable for everyone. If you watch this film and still don’t understand why it’s so extraordinary, you have no soul.