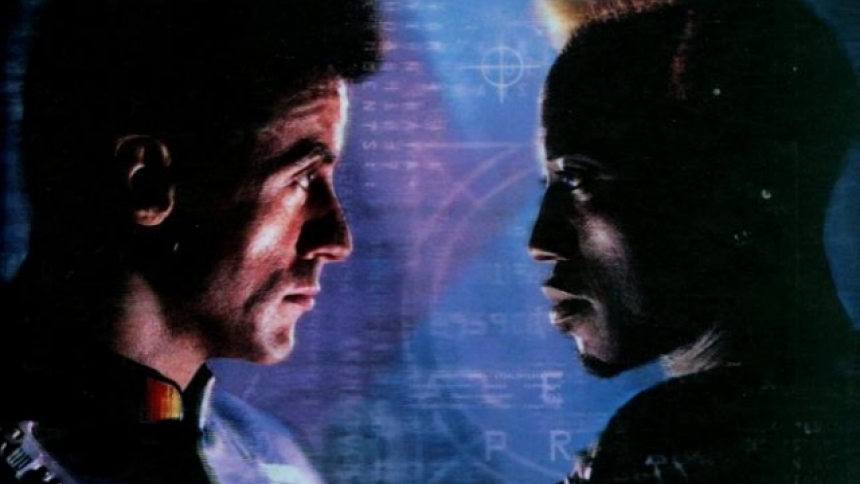 It’s 1996 Los Angeles and everything is on fire. Simon Phoenix (Wesley Snipes) is an apparent “maniac” who’s holding hostages in an old building. Sylvester Stallone (Sergeant John Spartan) enters from the sky to take down all the bad guys and outsmart Phoenix, alone.

Bang bang, karate chop, punch in the spleen – he’s in.

Now Spartan and Phoenix are face to face and ready to engage in an awkward bout of hero vs. villain banter. Cringe-forward to when Pheonix reveals the whole floor is covered in gasoline and explosive barrels — that’s right, he’s about to blow this place, cartoon style.

Spartan gets both men out in time, but the hostages are lost. Now of course, the only logical thing that could happen would be for Simon Phoenix to be arrested and John Spartan to get the Medal of Honor. Well, this movie isn’t based on logic, so the COMPLETE OPPOSITE happens.

Because the hostages died, John Spartan is convicted of involuntary manslaughter with a sentence of 70 years, which he’ll serve in a cryogenic prison that I guess our 1996 technology was capable of? They stick him in some gooey gelatin and don’t even bother putting him to sleep before they fill the tank, so he has to unpleasantly drown in goo until they freeze him. On the upside, at least his arch nemesis, Phoenix, is also getting gooed.

Now it’s 2032 and Lenina Huxley (Sandra Bullock) is a young police woman obsessed with the violence of 20th century culture and longing for a real crime to happen in her utopian city of San Angeles – the San Diego, Santa Barbara, Los Angeles hybrid city.

But it’s not a utopia for everyone. Edgar Friendly (played by Denis Leary) and his small posse of  WaterWorld people are living off the grid and trying to feed their starving families from beneath the streets. Edgar and his sewer friends become an important piece of the story later.

Aside from the starving people, San Angeles also features:

Back at the prison, the warden awakens inmates from their cryogenic sleep for parole hearings. This day is like any other, except the criminal being awakened is none other than the notorious Simon Phoenix. Clever Phoenix magically releases himself from captivity and, instead of trying to start fresh, he begins wreaking havoc. Something is different about him though, and as the story unfolds we learn what it is, and why.

Anyway, Huxley and her police crew are dumbfounded by Simon’s crimes, and after a truly pathetic attempt to apprehend him, they decide they need another 20th century barbarian to do it for them. Cue John Spartan. Fresh from the freezer, Spartan’s a stone cold fox in Huxley’s eyes, but he’s too busy realizing his entire family is dead to notice her admiration. How rude.

Let me pause here a moment and ask a valid question: Who thought Sandra Bullock and Sylvester Stallone would have chemistry together? What casting team honestly got together and said, “You know what duo would really turn up the heat in this film? Sylvester Stallone and Sandra Bullock. Yes…I definitely see that being an actual thing that should happen.” I’m just not feeling it. But the combination is painfully delightful, so it fits in well with how I’d describe the rest of this film.

Throughout the rest of the movie, Spartan works to defy modern society and help the incapable police track down Phoenix. Along the way, we discover the true story of the underground people, learn why Simon Phoenix is on a killing spree, and watch John Spartan grapple for personal redemption.

The last scene is a TREASURE.

Even though I spent most of my time writing about how awkward and weird this film is, it is that very ridiculousness that makes Demolition Man a must-see.