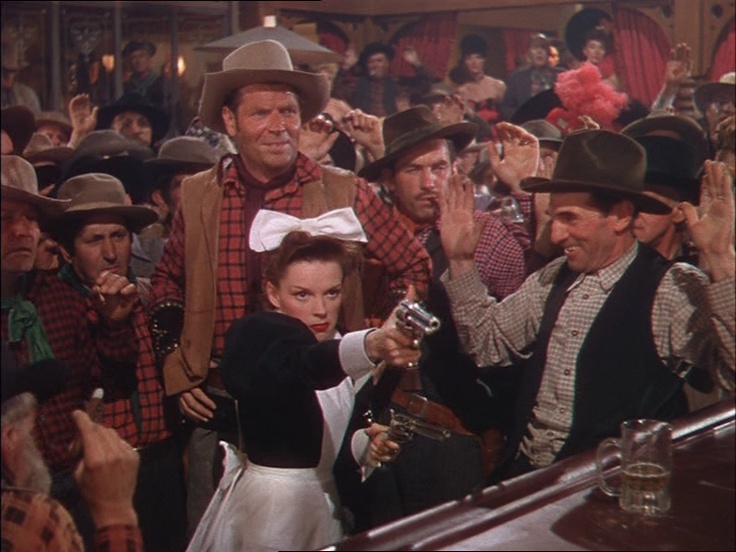 Strap on your cowboy boots and brimmed hat, we’re taking a musical ride to the old West. The Harvey Girls is one of my favorite musicals ever. It has something for everyone: The classic charms of Judy Garland, the ambiance of an old Western, young Angela Lansbury slutting-it-up in a corset, a pissed off snake in a closet, an all-female bar fight, historical fiction, a sensual mustached man, FIRE, steaks, and horrifically oversized head bows. While the storyline has “romance”, I like that the romance isn’t the ENTIRE focus. As those who know me well will attest, I’d rather absorb the rays of a 1985 microwave than watch a RomCom. The plot never makes sense, the female is always doing something annoying and stupid, and all I feel the entire time is anxiety. No, thanks.

The Harvey Girls story has some romance, and some comedy, but the other aspects of the movie still have room to breathe. The basic plot is that a young, extremely naïve (but badass) farm girl meets a group of women on the train as she is traveling to marry a guy she’s never met. The women she meets are on their way to open a Harvey House restaurant – a real chain of restaurants in the 1800’s set up at railway stations across the country to feed hungry travelers. Fun fact: It was the first restaurant chain in the United States. So anyway, her hubby-to-be is a man she’s been writing letters to after she answered his ad for a mail order bride. Did I mention she’s also desperate and apparently not afraid of murder?

Well, as plot twists would have it, when she arrives in the town she finds out she’s been duped. The guy sending her the letters is a greasy looking fellow with the IQ of a piece of bread. He’s had the sensually mustached saloon owner writin’ dem perdy things to her. Naturally — as any woman who just travelled 1,000 miles to a desert in the middle of summer on a train with no air conditioning would be — Judy Garland is PISSED. But, now she thinks, “Well, I’m poor AF, so I guess I’ll just stay here and open this restaurant with these broads I met on the train.” Seems reasonable. Before she rolls up her sleeves though, she makes sure to give Sensual Mustache the what-for. Now it’s a battle between the white-aproned Harvey Girls representing decency and conservatism and the free-ballin’ rouge-smeared saloon girls trying to defend their turf. The whole town is forced into the tug-of-war as Sensual Mustache’s friends try to drive the Harvey Girls out of their town.

One of the defining aspects of this movie is that, while it reeks of 1946 sexism in many ways, the representation of women overall is pretty gangster. The women aren’t the side piece, they’re the story.

They struggle, they brawl, they even go H.A.M. on some blacksmithing. These are independent and strong females. Angela Lansbury kills it as the sassy leader of the saloon girls. No man owns her, except maybe *Spoiler Alert* Sensual Mustache, who she’s desperately in love with — because who wouldn’t be?

Judy Garland and her Harvey Girls posse share the estrogen empowerment as they go to work with their female bosses slinging steaks and whacking weeds, all while pointing guns at anyone who gets in their way. Their resilience makes you root for them, even as they do ballet on a rickety balcony and sing about how old and sad they’ll be some day.