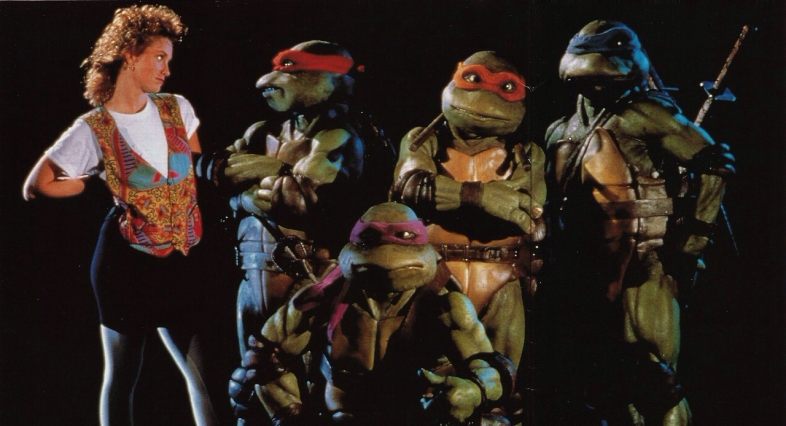 Jim Henson puppeteered the pants off this movie. Other names associated with the film include Elias Koteas (bad guy in Shooter and cop on Chicago PD)  as the ever-epic Casey Jones, and Sam Rockwell as a degenerate teenager. Perhaps the strangest casting choice for this film was Splinter, the wise, radioactive rat/father raising the turtles. He is played by none other than Kevin Clash, the man behind the iconic voice of Elmo. Splinter’s voice is not even close to Elmo, so, congratulations to that guy on his vocal range.

And — I didn’t know this until I looked it up — the guy who voices Shredder (hilariously over-the-top villain) was a random voiceover in several children’s films including Oliver and Company, The Lion King, Nightmare Before Christmas, and something called Casual Sex?, which is not a children’s film, but I just really want to know about that question mark.

The Story: April O’Neil is a feisty New York reporter asking the tough questions about crime. But one night while leaving the TV station, not even her hard-hitting eyebrows can save her. A team of teenage criminals attacks her, prompting the ever-vigilant Teenage Mutant Ninja Turtles to karate chop those bad guys into submission. Unfortunately, one of the turtles, Rafael, loses his sai (a giant fighting fork) in the process.  This is April’s first clue to the existence of the Ninja Turtles.

Shredder may be a bad guy, but he’s a well-informed bad guy. When he turns on the news and hears April asking too many questions about recent crimes, he orders she be silenced. His hit on April’s life brings the turtles back into her world, giving her a chance to learn about their past.

April and her new turtle posse work to uncover the crime ring destroying their city, finding a few friends along the way.

Casey Jones, a fellow vigilante and 100% non-turtle, comes into the picture as a smart-mouth adversary who eventually joins the crew to deliver JUSTICE.

If you have absolutely zero idea about this film, I suppose I should take a moment to describe each of the turtles. The four turtle brothers were named by Splinter. As a deep mind and spiritual rat-soul, Splinter named each of the turtles after a revered Renaissance thinker or artist: 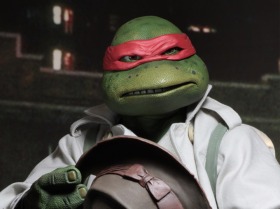 Rafael – Rafael wears red. He’s the angriest, most aggressive of the turtles. Rafael has some rage issues but he genuinely cares about his family. His weapon of choice is the Sai, a pronged pair of Asian weapons/forks.

Leonardo – Leonardo is the ying to Rafael’s yang. Instead of being reactionary and hot blooded, Leonardo is calm and logical. Leonardo wears blue, because he’s chill. He rocks two long sticks for his weapon, which he keeps crossed over his back so he can look like a badass when he pulls them from his shell-holster.

Michelangelo – Michelangelo is every teenage boy you ever met. All he wants to do is eat pizza and make wisecracks. Michelangelo wears orange because he’s INTENSE. His weaponry is all about the nunchucks. A fun weapon for a fun guy!

Donatello – Donatello is a balance between the personalities of the other three Turtles. While he is sensitive like Leonardo, he’s a bit more practical. He shares the wit and humor of Michelangelo, but is more understated. He speaks his mind, but with controlled intensity, unlike Rafael. Donatello wears purple, the color of royalty, and he uses one stick as his weapon, because he doesn’t NEED more than one, ok! 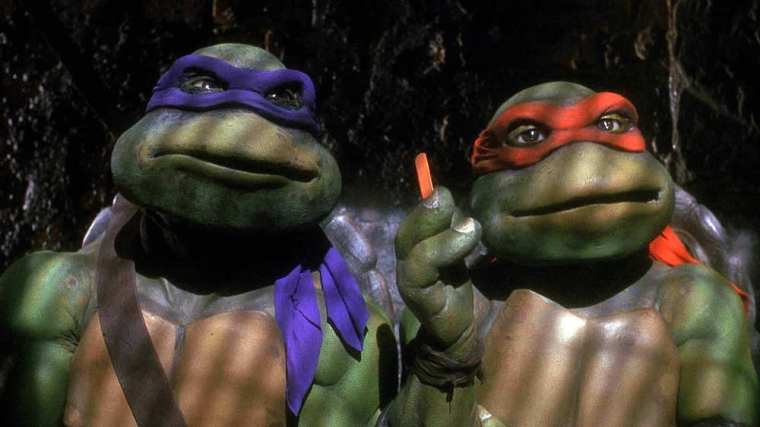 I know I shouldn’t pick favorites, because I do love them all, but if I had to pick ONE turtle, I’d say Donatello is my choice. I appreciate his level-headed but passionate and charismatic nature.

There’s an underground hangout in TMNT where all the rowdy teenagers go to kick it. Every time I watch it, even as an adult, I wish the place was real. Even the song playing over the loudspeaker is gangster. Of course, I would never have been edgy enough to hang out in such an establishment as a high schooler, but I can pretend. It has an indoor skate park, a bunch of video games, blaring music, and all the children are smoking cigars. It’s amazing.

Shredder has a very Darth Vader vibe going on, even saying at one point “I am your father” to the misfit boys who follow him. It makes sense that his secret hangout is so fancy because he clearly understands style. He wears a sparkly, red onesie with a full-on metal face mask and spiked metal shoulder pads that makes Prince look like an amateur.

Teenage Mutant Ninja Turtles was made early enough in the 90s that is still rides the coattails of the 80s — oversized hair, questionable adult innuendos, lack of technology making life 5,000% harder, and hip hop music. This is not just a mutant-turtle kids movie, it’s a family classic. You need to stop what you’re doing and watch this movie or you’ll be dead in seven days. I’m just kidding, you’ll be fine, but seriously, see this.